Also showing the hero's melee hurtbox that these hitboxes will interact with.

The current supported abilities are:

It is recommend to only 2 human players since the mode involves many effects.

In Overwatch, a melee hurtbox (MH) was used for each hero to determinate hits from large area-of-effect based attacks. This is generally faster to calculate than using the more detailed hitboxes that were dedicated for bullets and projectiles.

The player can manipulate the MH's size by crouching. This will reduce the height of the capsule, and can possibly dodge and avoid some attacks.

All numbers to nearest 2 decimal places.

The hitbox for Quick Melee is a sphere 1.5m away from the facing direction of the player, with a radius of 1m.

The hitbox will stay active for 0.16s. The hitbox visualized in-game will turn from blue to yellow to reflect the active period.

During this period, the player can look elsewhere to reposition this hitbox and damage others even if they were out of reach initially.

These two abilities have similar mechanics for their hitboxes.

The hitboxes stay active for some time after reaching the final position of that swing, hence, similar to Quick Melee, one is able to extend the range by looking around.

Again, the in-game spheres will turn yellow when it is active.

Hook works also similar to Hammer and Primal, but with the added constraint of checking collision with the world (Hook ending early if colliding with the map geometry), and the path of the spheres will lock 0.16s after activating the ability.

The radius of the sphere is 0.5m, and the final position of the hitbox are always at 20m away from the facing direction of the player, regardless of player scale.

For Hook only, the intermediate spheres visualized only applied to a player scale of x1.0

The hitbox is a sphere centered at 0.1m above the landing position of Doomfist.

The damage dealt depends on the distance from this center to the surface of the target's MH. If the distance is less than 2, the damage is fixed at 300, indicated by the red sphere.

Otherwise, the damage scales from 200 to 15 linearly at distances from 2 to 8, indicated by the larger aqua sphere.

You can preview the damage dealt to nearby enemies using the aqua-coloured text above their heads (when not zoomed out during Ult), if you were to land at the current position.

The mechanic is identical to Meteor Strike, except the dimensions and damage numbers changed.

Note: There are some issue with the predictions compared to Meteor Strike. This may be caused by the rapid movement during the slam, and causing the actual center of Piledriver to deviate from the theoretical value. However, if Start Forcing Player Position is used to lock Ball's position, then the prediction is 100% accurate.

There are 3 criterias to damage an enemy using the Dragon.

The Dragon arrow will travel 10m, disappears, and then the Dragon will spawn at the 11m mark. The target must be on the same side of the plane with a normal of the direction of the Dragon arrow.

In-game, the HUD "Dist to Dragon Plane" indicates this shortest distance to said plane, and must be positive.

The Dragon's hitbox, are 7 spheres, separated 5m apart, each with a radius of 4m. Hence the distance between the first and last sphere is 30m, and the maximum range is 38m. They are indicated by the blue spheres.

The axis of the dragon is identical to the direction of the initial arrow.

If the distance between the target's origin and the axis is less than 2.4m, the target will receive 57.6 damage every 12 game ticks (0.192s), effectively dealing 300 dps.

This area is approximated by the red spheres.

The Dragon travels at 12m/s for exactly 20 second, covering 240m in total.

The dimensions (size, speed etc.) for the Dragon is always the same, regardless of the player's scale.

Very similar to Quick Melee, except that looking up or down has no effect on the position of the hitbox.

The actual center of Flux is located 5.5m below the targeted floor. The hitbox is a combination of a sphere with radius 15.5m, and a cylinder of radius 8m. The cylinder's base aligns with the height of the center of Flux. Therefore, the effective height from the targeted floor is 10m, and are able to extend below the floor by 5.5m. The target's MH must intersect both the sphere and the cylinder (plus LOS check, of course). If the targeted point is B, then the actual center is at D. The hitbox is then the yellow area. An enemy located at K would be considered inside the hitbox, if BC is a vertical wall.

As with patch 1.61, some aspects of Call Mech was changed, so the following may not apply. Changes to the mode will be made.

With the 250 damage buff, this becomes more relavant in-game so I did another round of test on this ability.

The shape of Call Mech's hitbox is a sphere. There is no falloff, so if your MHB are intersecting the hitbox, you'll take the full 250. The radius is 3.0 meters. The center located at 2.0 meters in-front and 0.5 meters above D.Va's origin at the moment the Mech touches down. The location of the Mech is just where D.Va will end up after the transformation, it does not reflect the true position of the actual hitbox. See diagram below. 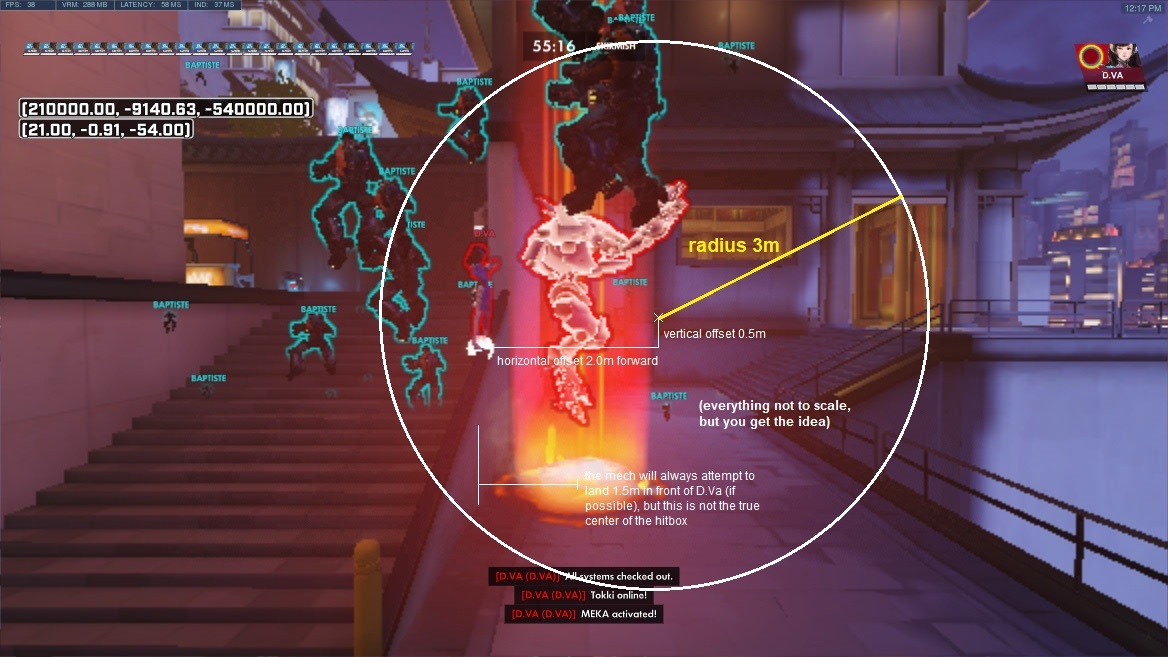 In this mode, the hitbox is represented by the red sphere, with a smaller sphere indicating the center. The damage numbers on top of the enemies does not consider any sliding (for example, when ulting against a wall) D.Va will make during the Mech drop) 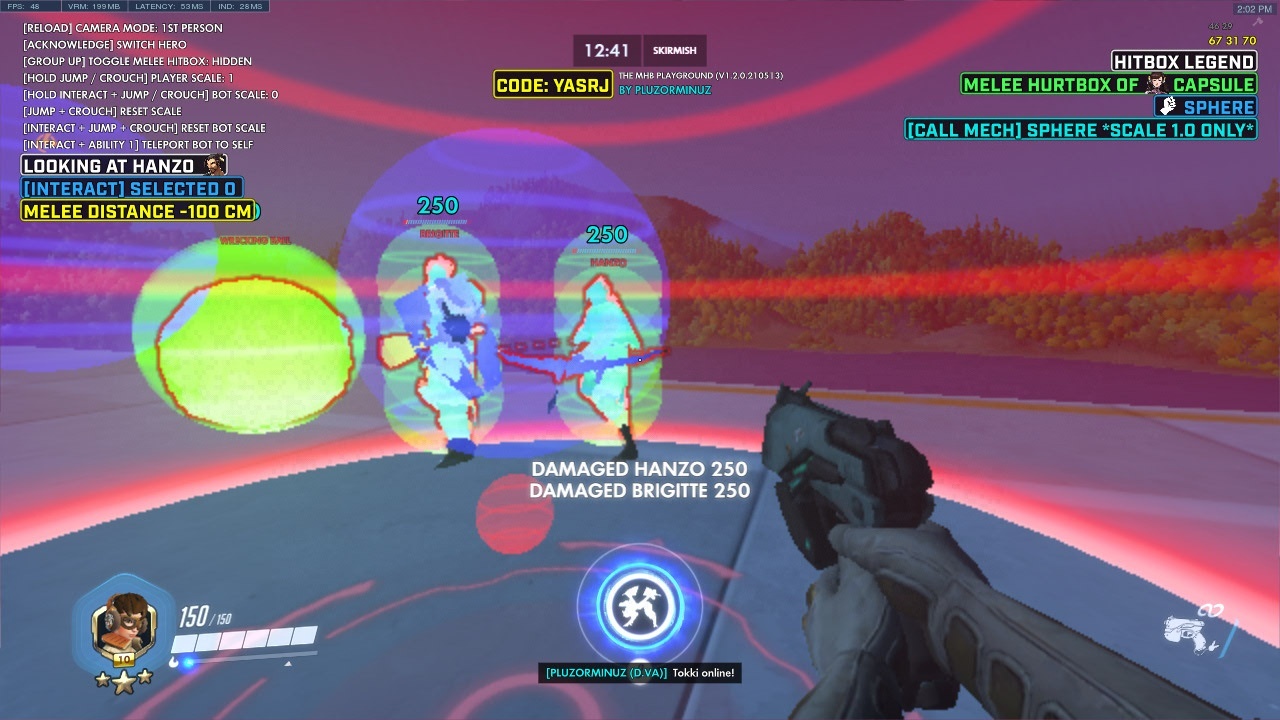 Alternate visualization (not this mode)