This is a new take on the good old mode that goes under many names such as best skin wins, skin contest or theme contest. The following paragraph includes core rules so you can skip it if you are familiar with some other version of the mode.

Best skin wins is a simple mode about showing off the best skins that players have. Team 1 are the contestants while Team 2 is the judge. In the first 40 seconds of the round, during the hero selection screen, the judge has to choose a theme for the current round. Contestants have to select their hero and their skin based on the chosen theme within the 40 seconds long hero selection screen. After the round begins, all players are teleported into the central area. The judge chooses the winner of the current round based on the contestant's skins and his own personal preferences. Contestants may also use emotes, sprays or voice lines to impress the judge.

Variations to the core rules exist, for example skins only (no emotes), rooted contestants, two judges or contestants proposing themes to the judge. The goal of this mode is to offer support to all variations that I know of. This means if you don't like it's default settings, you can customize my version to fit your liking without losing any functionality.

And if you have a suggestion for a feature or a new theme, write me in the commets here.

To start, just import the code and get at least two players on opposing teams. Check the settings section down bellow if you want to change some setting. The game must be started manualy unless all slots are occupied. It's recommended to switch the judge after every game (9 rounds by default), unless the judge is extra good. As moderator, you can press CTRL+SHIFT+= to instantly pause and unpause the entire game. Use this if the judge is exceptionaly slow with deciding the theme (happens quite often - use automatic theme picker as seen bellow).

Contestants are all on team 1. As contestant, you can't do much except chosing your hero and skin and trying to catch attention of the judge. Contestants may also upvote other contestants to compliment their skin choice. You can do so by targeting another contestant and pressing Interact.

As judge, you have multiple commands at your disposal. Near every contest area, often clearly visible, you can find a circle of spheres called command board. Each sphere represents one command and judge may activate the command by coming near the sphere and shooting it or by pressing melee.

Some commands are already bound to your keyboard. The following paragraphs describe each command on the command board.

Reset positions command moves all contestants to their default positions. The default positions are the 10 positions of the initial 10 rings. This does not toggle their movement restriction. This button is useful if you want to reset a contestant who is hiding from you, or if contestant uses walking emote (like hopping mei) to leave the area.

Toggle movement changes, wheter the contestants can move or not. If contestant movement is being restricted, contestants will also be teleported to their default positions. Some judges allow contestants to move, while others want contestants rooted, therefore usage of this command is up to personal preference.

Request emotes will display large text over everyones screen that says Judge wants to see your emotes, voice lines or sprays!. This is a quick way to request emotes from contestants.

End Round ends the current round and sends everyone back to hero selection screen. Judge doesn't have to jump off a cliff to end the round.

Toggle auto theme creates big yellow text above the contest area. This text shows current round theme as well as next round theme. Themes are randomly picked from internal list of themes. Players are not forced to use the theme picker and if they don't like the theme picker, they can disable it. However, many games become stale, due to judges picking red theme or widow theme or winter theme over and over again. The internal list of themes contains these generic themes, but it also more exotic themes such as current map theme, shoes theme or sprays theme. In adition, this function helps when the judge can't think of a theme or is taking too much time to think of one.

Toggle partner mode assuming you are activating partner mode, this command will destroy current ring setup and instead create 5 medium sized rings. It will also allow contestants to move, if they are rooted. If you are deactivating partner mode, this command will destroy the 5 medium sized rings and instead create the default ring setup of 10 small rings. Use partner mode to give two themes and let contestants form pairs where each partner has to meet one of the themes.

Toggle group mode assuming you are activating group mode, this command will destroy current ring setup and instead create 2 large sized rings. One ring is Red while other ring is Blue. It will also allow contestants to move, if they are rooted. If you are deactivating group mode, this command will destroy the 2 large sized rings and instead create the default ring setup of 10 small rings. Use group mode to give two themes and let contestants decide which theme they want to go for and form two large groups.

Note that both group mode and partner mode are quite difficult game modes. Not every lobby will enjoy these modes and not every lobby will give good results. From personal experience I recommend running one of these modes for multiple rounds (3-6 rounds) before switching it off. During this time, I recommend chosing easier themes at the start and harder themes in later rounds. Bellow you can see example themes for partner mode sorted by difficulty. The last line contains how you should announce a theme for a group mode.

Reinhardt and Brigitte themes
White and Black themes
Good guy and bad guy themes
amazing beard and spectacular hair themes
color coordinated theme - your skins must have colors that go well together
Sprays theme - as partners, match two sprays which go well together!
(for group mode) Reinhardt theme for the red ring, and Brigitte theme for the blue ring.

Okay listen up! Next round we will play Partner mode!
I highly recommend that you get a partner and communicate through chat NOW.
You will get TWO themes and with your partners you must meet BOTH themes.

Okay listen up! Next round we will play Group mode! There will be two large competing groups.
You will get TWO themes with assigned Red and Blue colors. It's your decision which theme you want to use.
When the game start, you will go and stand within your ring color with your group members. The whole group either wins or loses.

Not happy with something? Bellow are all possible settings that you may change in the workshop code:

Disable game HUD rule hides default HUD. This is recommended settings. This however hides your hero hud too (heath, ammo, ultimate and reticle). If you wish to have your reticle on, then disable Disable Hero HUD action within the rule.

HUD Readme rule creates text in top left corner of your screen. It will be visible no matter the settings of the first rule. Only by disabling this rule you may hide the text. You may customize actions within this rule to change what each contestant, each judge and the moderator sees.

Round counter HUD text rule creates a single piece of text on top center of everyones sceen. The text shows the current round out of 9 rounds. It replaces default elimination UI, which is terribly widened when playing with asymetrical teams. You may disable it, or change the text if you change the amount of rounds per game.

Icons rule creates an exclamation mark above the moderator and eye above the judge. Disabling this rule will disable the icons. If you want to play with two judges, you may enable the second eye icon action, which is disabled by default.

Themes rule contains all integrated themes. These themes are only used when you enable automatic theme picker from the command board. You may remove themes you don't like by selecting their checkbox and clicking on the garbage bin icon. You may add more of your themes by copying existing theme, pasting it and then changing the text of the pasted theme.

Ten Keybinding rules are available which can be used to bind all ten of the commands onto your keyboard. By default, only Toggle Contestant Movement, Emote Request and End of Round commands are activated and bound to Group Up, I need healing and Interact buttons. To use a keybind, first make sure your selected rule is enabled. Afterwards, open the chosen rule and use either Is Button Held or Is Communicating condition to set up your keybind (you need just 1). Is Button Held includes action buttons such as Primary Fire, Reload or Crouch. Is Communicating includes communication actions such as Yes, Ultimate Status or Thanks.

Variables and map setup rule defines basic values necessary for the game to run corretly. You may change Global.contestantmovement action to True, if you want your contestants to move by default. This rule can also be used to add new maps or to add new locations for the contest on existing maps, but I'm too lazy to explain how. If you want me to add a specific position, send me a message and include a screenshot and I will do it for you in the next version. Hopefuly.

If you want to add a second judge slot, go into Settings -> Lobby (not in workshop) and set max team 2 players to 2. Refer to Icons rule for the icon info. Do not increase the max team 1 players to 11!

If you want to change available maps, go into Settings -> Maps (not in workshop) and enable or disable whichever maps maps you want. Note that not all maps are supported as of 2.2. version. 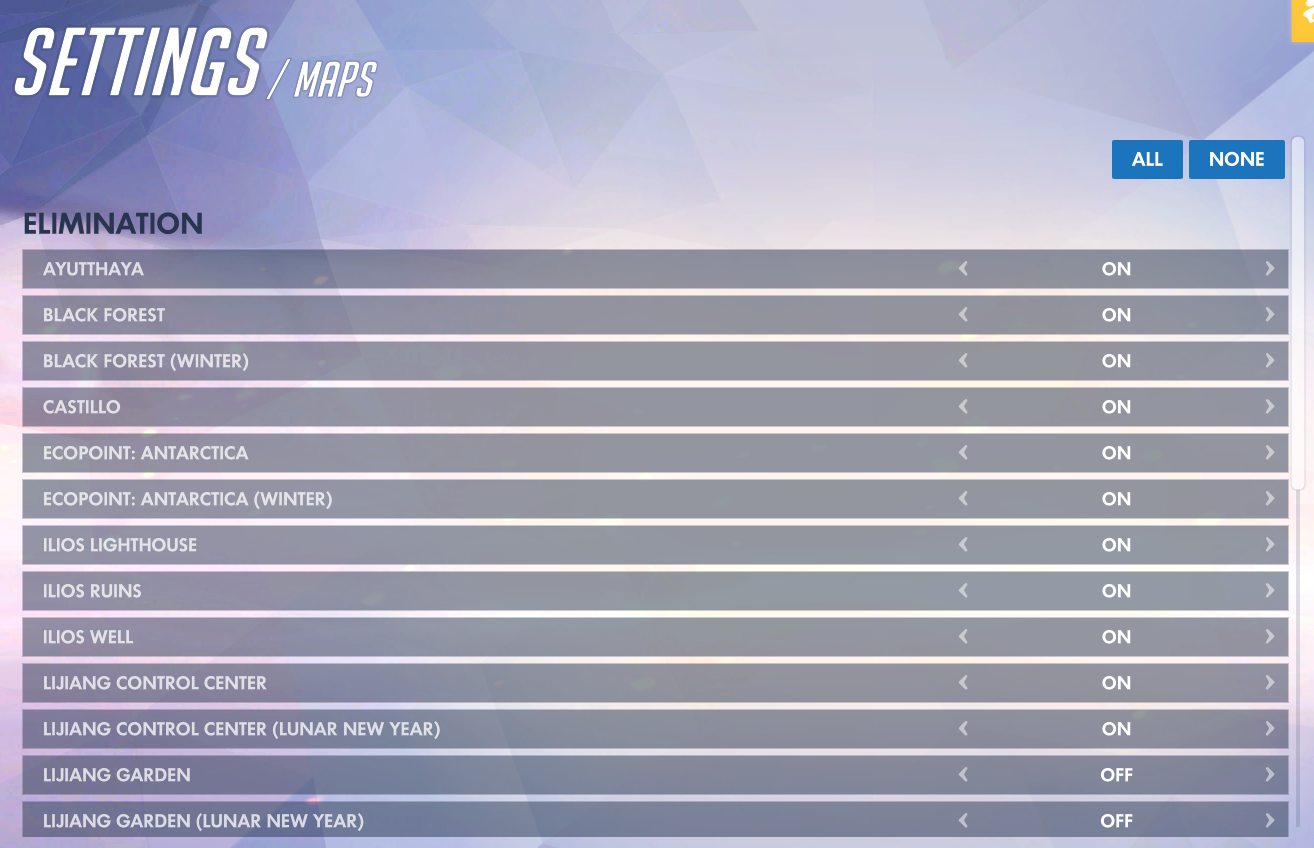 If you want to decrease the number of rounds before the match is over and new map loads, go to Settings -> Modes -> Elimination (not in workshop) and change Score to win to desired number. Refer to Round counter HUD text rule for the counter info. 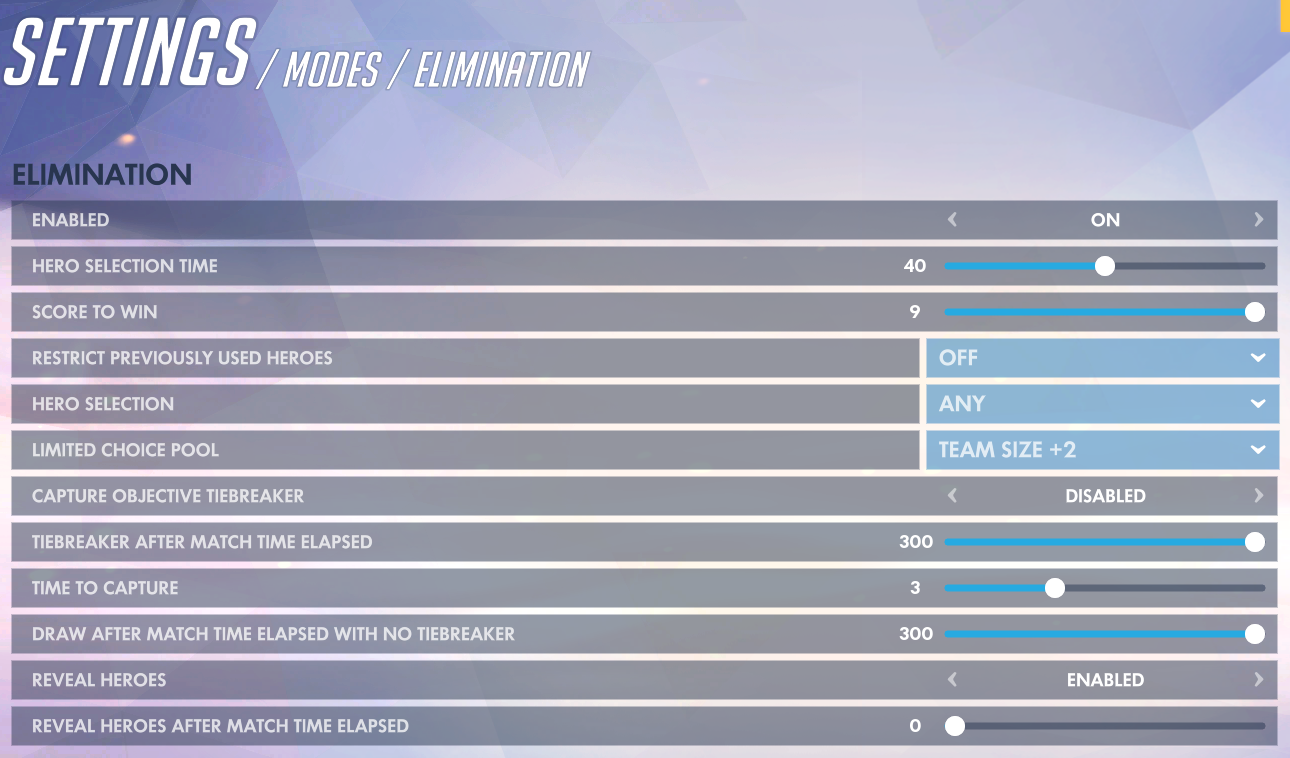 add remaining maps
add partner/group mode rules into the game
?add tutorial text into the mode? ?is this necessary considering this post?
add more themes
rewrite this stuff for 3.0 and allow support of maps without elimination ruleset (a man can dream) 4v4 Nano All Heroes by Nickian

Tiny The floor is lava by Dayglow206