A Workshopper's Guide to the Vector Last updated July 06, 2020

What is a Vector?

A vector is a set of 3 numbers: X, Y, and Z, that can represent a position or a direction. To get the X, Y, or Z as a single number, use the methods X Component Of, Y Component Of, and Z Component Of.

Note that using the Live Capture (Camera) button to generate a location vector selects the player's current eye location (about 1.5m above the foot position of the player).

Global locations are fixed to the map and do not change. To obtain the global location of an entity or player at any time, one can use Position Of.

Global locations can be transformed to be defined relative to a player's location and facing direction via the value Local Vector Of. In local coordinates, the player’s foot position is always [0, 0, 0]. The X becomes how far left or right of the player the position is, relative to the horizontal direction the player is facing, with positive X being to the left. The Y becomes how far up or down the position is relative to the player, with positive Y being up. Finally, the Z becomes how far forward or backwards the position is relative to where the player is and which horizontal direction they are facing, with positive Z being forward. If that’s confusing, hopefully an example will help. Let’s say that we have a location at (105, 16, -104) and a player at (100, 10, -100) facing towards positive Z (facing direction [0, 0, 1]). If we use Local Vector Of to transform our location to local coordinates relative to the player, the X will be 5, since the location is 5 meters to the left of our player. The Y will be 6, because the location is 6 meters above our player, and the Z will be -4, because the location is 4 meters behind the player, making the final result [5, 6, -4]. When translating a location to local coordinates, the Transformation mode should be set to Rotation and Translation for correct results. Local locations are useful for keeping something in a certain position relative to a given player (for example, an effect that follows a player).

Here’s a vector that we have labelled u. 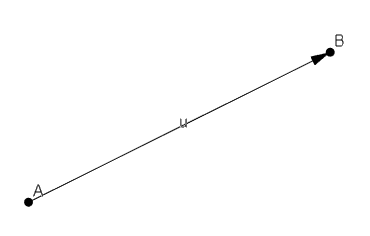 More formally, we can say that a vector is a geometric object with both magnitude and direction. Magnitude is interchangeable with length in this context. We’ll use magnitude moving forward.

Note that the position of a standard vector isn’t important. That is, we could move u anywhere in our diagram and as long as we preserved its magnitude and direction it wouldn’t matter.

Let’s define some concepts, which we’ll use to simplify following topics:

Let’s move into a 3D space to replicate Overwatch’s environment. Here’s a different u. 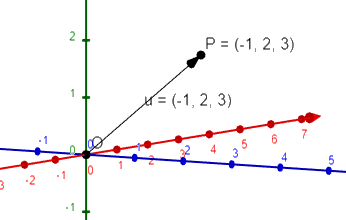 Firstly, the x axis is red, the y axis is green and the z axis is blue.

In the previous section we established that position isn’t important for standard vectors. However, position is important for position vectors - we can’t just move u because it’s fixed between coordinates O and P. We will soon see the significance of this.

All global vectors in the Overwatch workshop are position vectors. We can now understand why the value Vector() takes three arguments - they correspond to the x, y and z components of the vector.

A scalar is essentially just another name for a regular number. For example, suppose we have a vector u = (-2, 1.5, π). Then u is a vector and not a scalar, but each of its components is a scalar.

Suppose we have some scalar λ (lambda) and some vector u. Then multiplying u by λ scales the magnitude of u by λ.

If λ is negative, the direction of u is flipped and then λ scales the magnitude of u as if λ were positive.

The following diagram illustrates this concept with standard vectors. 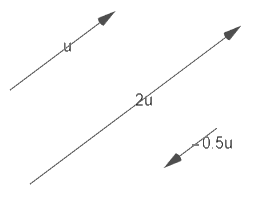 Note that -u gives u in the opposite direction.

Also note that two vectors u and v are parallel, or rather are in the same direction forwards or backwards, when there exists a scalar λ such that u = λv.

But what happens if we multiply a vector with another vector? There are multiple ways to do this, which we will explore later.

We will return to standard vectors to begin talking about addition and subtraction. Here are two vectors u and v. 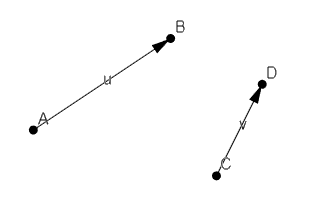 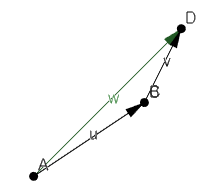 We can draw v + u to observe that it produces the same vector. 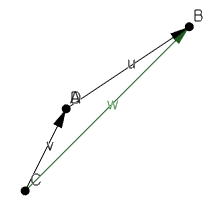 Hence we can conclude that the addition of vectors produces another vector and is commutative, that is u + v = v + u.

Note that adding or subtracting a scalar to a vector, or the other way around, is an undefined operation. Don’t do it and don’t worry about it!

While every vector possesses both magnitude and direction, oftentimes only the direction is relevant to the user. In cases such as these, it can be useful to set the vector’s magnitude equal to 1 while preserving its direction. This process is called normalization, and the resulting vector is called a unit vector.

To normalize a vector, divide it by its own magnitude.