Based on 'Advanced Murder Mystery' by AlonelyTaco on xbox.

What if you could play among us, and plant bombs inside walls? Now you can do both!

As the bomber plant a bomb hidden away from other players and wait until the time runs out (or murder them all, either one is fine)

However, as bomb squad your job is quite different, you want to find and diffuse hidden bombs.

Join your nearest Bomber Mystery lobby or create your own to join the fun!

The bomber plants a bomb in a wall, ceiling or floor and bomb squad tries to diffuse them without being killed. Innocents are on the bomb squad's side, but can't really search for the bomb. They have to vote out who they think is the bomber (like if they see the bomber murder someone).

Keep in mind that anyone could be lying about anything.

As bomber, your goal is to plant a bomb. You will have about 55 seconds after you are given your role to plant your bomb. To plant a bomb, use your wall phasing bomb placement device. Hold secondary fire to activate it, then press primary fire to set your bomb.

Don't let anyone find your bomb. If it dies, so do you.

Note that no one can see your bomb before bomb placement time is up, but anyone can see it after.

As the bomber, you can also murder players to win even before your explosives go off. Instructions on how to kill are shown on the left side of the sceen. (kill ability kills a nearby player) 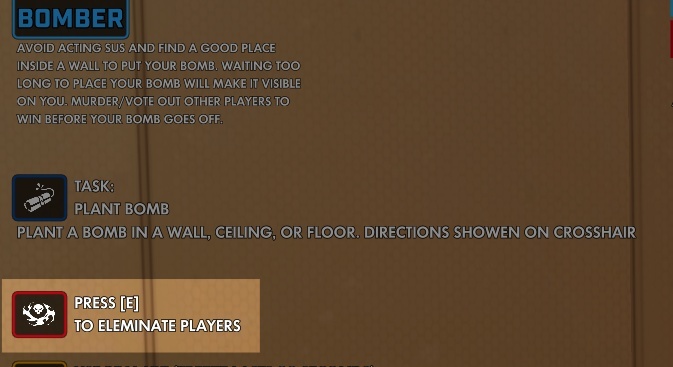 As Bomb Squad your goal is to find the bomb or vote out the bombers.
Search large areas with your bomb area scanner (ability 1) and once it detects something, use your bomb probe to find and diffuse it. Diffusing the bomb means killing the bomber. 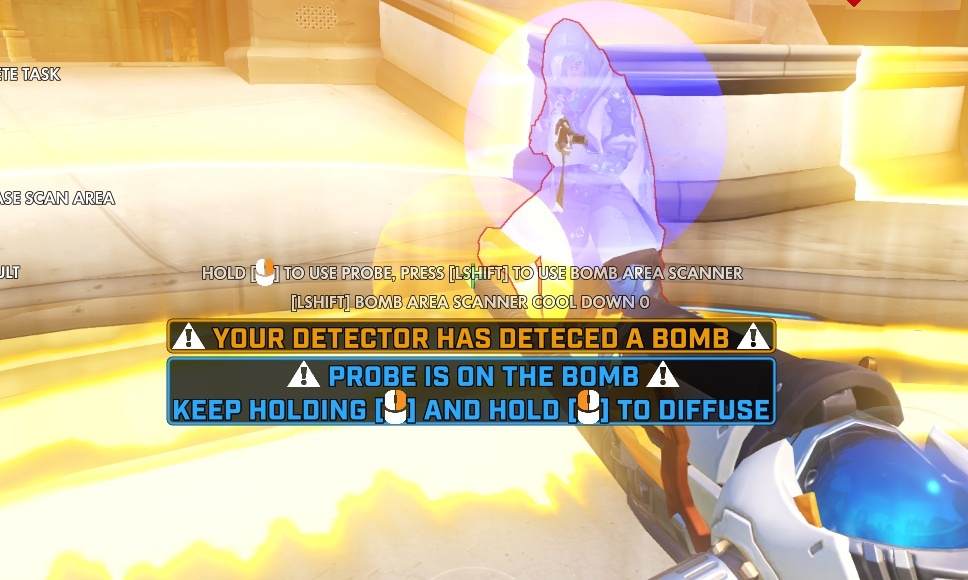 Eliminated bombers have a yellow outline around their corpse.

As an innocent your goal is to get the power online (if you have that task) and to get your ultimate. The power helps the bomb squad's cool downs so they can search much faster. As an innocent, keep an eye out for murders as the murder is the bomber. Call a vote if you think someone is the bomber.

Everyone can get their ultimate, but how they get it varies.

Bomb Squad and innocents must do tasks to get their special ability, however bombers need to plant a bomb and wait for bomb placement time to run out to get their ultimate.
So, If someone has their ultimate very early in the game, it could very well be that they're the bomber.

Note: Killing a bomber using your ultimate ability will diffuse their bomb.

There are 3 types of tasks (4 technically).

Players will randomly recieve one of the tasks (unless they are the bomber, it which case their task is always the same)

To start a vote, use the call vote button.

Players (as of this update) get 2 vote calls each.

Once in a vote, look at the player you want to vote out and press primary fire. Make sure to submit your vote (press reload) or it won't be counted.

Make sure to check that the player you want to vote out is the one shown as on-screen text in the middle of the screen.

One. It is removeable.

What if I jump off a cliff with the bomb?
▼

Your bomb is diffused if you die. You will also die if it is diffused.

It is displayed near the top of the screen just under the score board.

Why is there a blue thing on me?
▼

You carry the bomb if it is not placed. Other players won't see this if bomb placement time has not run out.

After this, Use your bomb area scanner around the map (Deploy it by pressing ability 1, keep in mind it has a rather lengthy cool down if someone has not completed the power task)

After it detects a bomb, use your bomb probe to find its exact location (Hold secondary fire)

After you find it with your probe (Blue text has shown up and there's a bleeping sound) Follow the instructions of the blue text to diffuse (Hold secondary and primary fire) and keep holding until the bomb diffusion progress bar is finished.

How do I know if I detected a bomb with my scanner?
▼

Big orange text will show up in the middle of your screen.
Scanner sphere will play effects.

I see the bomb but can't diffuse it
▼

You need to keep in mind what is doing the diffusing.

Your bomb probe (hold secondary fire) needs to be touching or very close to the bomb. Distance between the player and the bomb is not checked.

Why is there a dude wearing a blue sphere?
▼

If you see someone wearing a blue sphere that automatically means they're the bomber.

That blue sphere is the bomb. They are carrying it.

Okay so there's a dude wearing a blue sphere what do I do about it?
▼

Call a vote and vote them out. Don't risk chasing them with your diffuser.

Isn't the bomber still alive if I diffuse their bomb? won't I also need to vote them out?
▼

The bomber dies if their bomb is diffused.

The time the bomber(s) have to hide their bombs before anyone can detect and see them.

What's the point of this role?
▼

It would be too overpowered for everyone to be bomb squad.

If you don't, just look out for murders and vote out the bomber that way.

Do tasks to get your ultimate

If your the bomber, you task is only to plant the bomb.

If you are Not the bomber, your tasks are located at the colored arrows.